The link has been copied.
Notices

There will be an update maintenance on May 26th (Thu).

You may not access the game during the update.

*Update details may change due to unexpected issues

As announced in the previous notice on the 23rd of May, the balance adjustment of the heroes and fatecores will be applied.

The heroes that will be adjusted are as below.

For more details on the balance adjustment, please check the link below

Another chance to recruit a Mythic hero!

Mythic Hero Selection Re’ is here!

Mythic Hero Selection Re’ is a recruit content where you can select the Mythic hero of your choice and try to recruit with the increased chance of pulling. 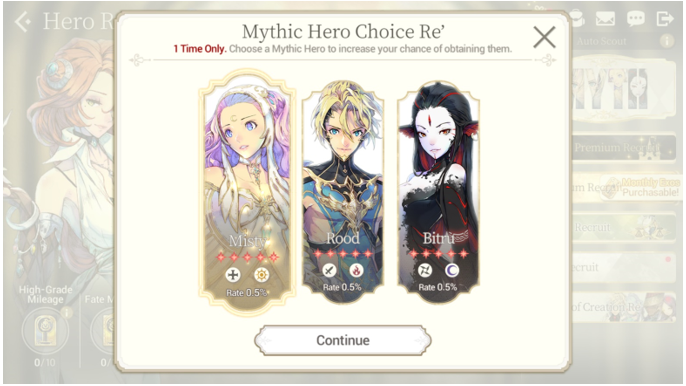 You can select the Mythic hero from the list to recruit.

The hero that you have selected cannot be changed.

In Mythic Hero Selection Re’, you will need the same Mythic Hero Recruit Ticket that you had used for the Mythic Recruit.

There is the Step-Up reward similar to the Mythic Recruit,

You can obtain the Step-Up reward that goes up every 11 recruits and there are up to 5 step up rewards in the Mythic Hero Selection Re’.

In this Mythic Hero Selection Re’, you can obtain ‘Black Fatecore Recruit Ticket’ as a reward for all steps.

※ The probability of recruiting in Fatecore Chance Up is 0.5%.

※ You will need the Mythic recruit tickets to recruit and 1 Mythic mileage will be given per 1 recruit.

※ The Mythic mileage reward can be received every 280 mileages maximum 3 times.

※ Mythic Hero Selection Re’ Step Up rewards will reset when the event period ends and it cannot be recovered.

An event to obtain a Mythic hero!

The Mythic Challenge Mission is here!

In this Mythic Challenge Mission, the hero that you have selected for the Mythic Hero Selection Re’ will appear in the events screen. 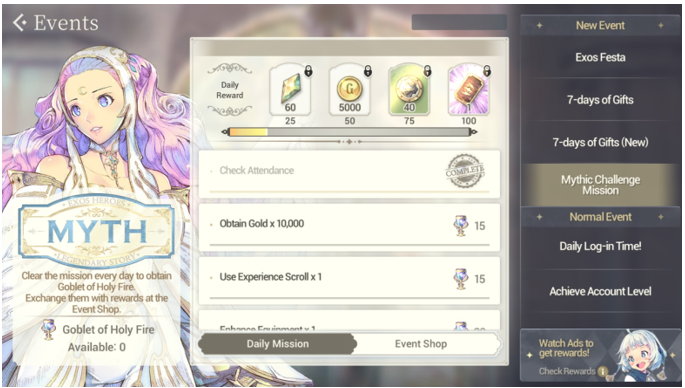 Clear the daily mission to obtain ‘Goblet of Holy Fire’.

The daily mission clear records will be initialized everyday so that you can try and obtain the Goblet of Holy Fire.

The daily rewards are the number of rewards that you can obtain by using the Goblet of Holy Fire.

The daily reward obtained records are reset everyday and can be obtained again.

Items can be purchased with the obtained Goblet of Holy Fire from the event shop.

In this event shop, you can purchase various items such as the Mythic recruit ticket, Gold Fatecore memory, Ultimate Orb, Holy Water of the Universe and many more.

※ The price and number of purchase limits differ for each item in the event shop so please check before purchasing.

※ The Goblet of Holy Fire is initialized after the event ends and it cannot be recovered.

Core Raid < Dragon Emperor’s Knights > is back in Extended version.

Don’t miss out on the stories and the mythic recruit ticket in the shop! 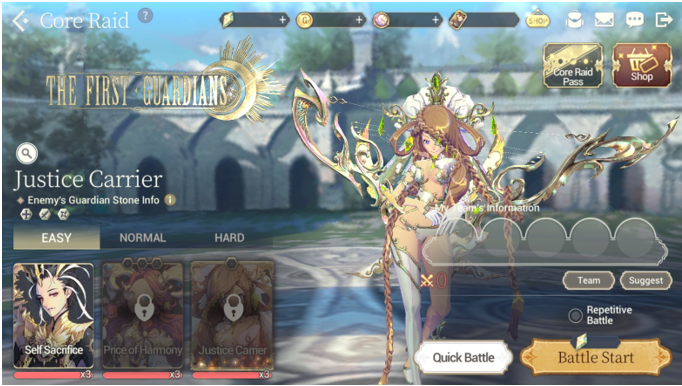 - Basic items will be refreshed regularly after a certain amount of time.

- Raid items are fixed therefore you will need more Raid Coupons than the basic items.

- If you purchase all the Raid items, you can receive a Step-Up reward and also refresh it to the next Raid item through Step-Up reset.

The rewards for each Step Up are as below. 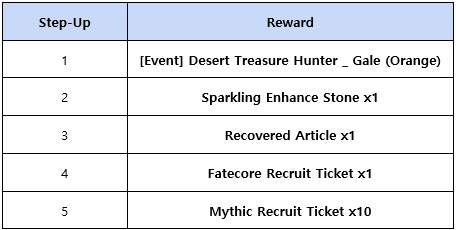 ‘[Event] Desert Treasure Hunter _ Gale (Orange)’ is given without the hero.

: Core Raid Pass has missions that your can clear through the Core Raid dungeons and shop.

: Clear the missions and obtain Pass Experience so that you can raise the pass levels.

: You can obtain the rewards that are set depending on the pass levels.

: The missions do not reset and the number of clears will be accumulated.

: Purchase the Premium Pass so that you can obtain more rewards.

: You can increase the Pass level by spending your Xes.

※ Raid items can be updated to the next step of Raid items by resetting Step-up.

※ Step-up reset will not be available once you have obtained all the step-up rewards.

2 new mini games have been added to the ‘Mini Game’ menu in the village.

There will be new ranking system and Titles added regarding the Mini games. 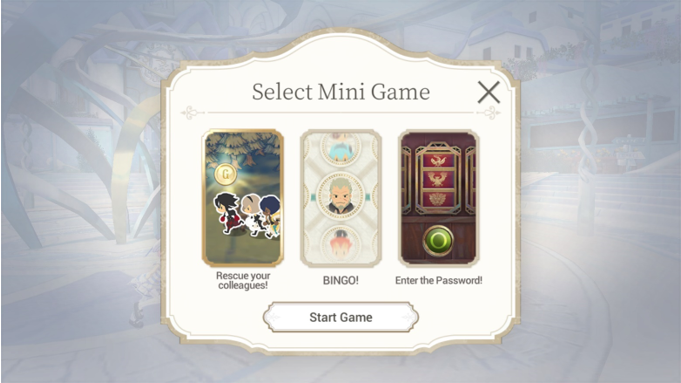 You were only able to play it once, but now feel free to play it anytime from the Mini Games menu! 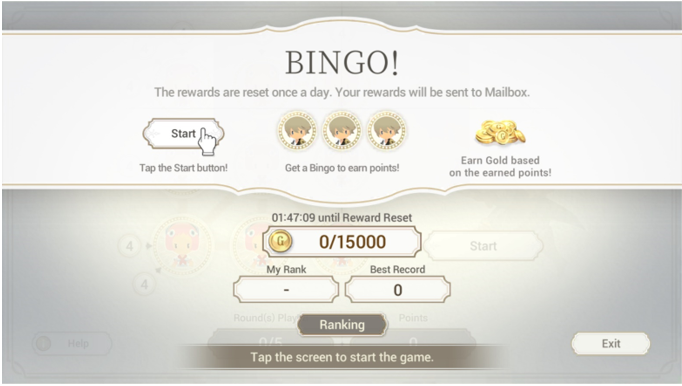 B.I.N.G.O! is a 3 x 3 bingo game where you can play with the Exos Heroes heroes.

There are 5 rounds in the Bingo game.

In each round, 4 points are given per line and when the game begins the heroes on the bingo board will change randomly.

The types and numbers of heroes in each line will be decided and the multiplier is applied to the 4 points given according to the bingo.

When all points of the lines are added up, you will be given a choice to proceed with the Double Chance game. 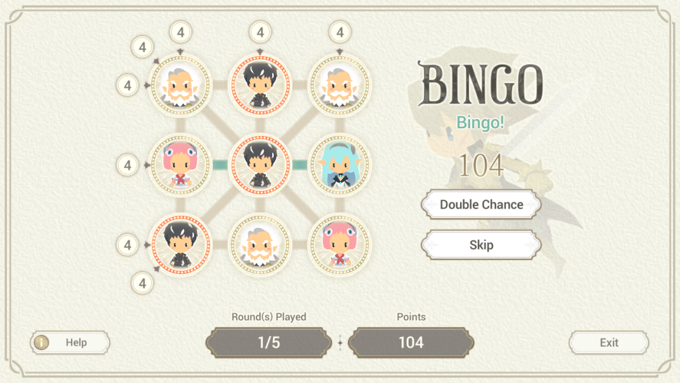 Double chance game will a game where you have to choose whether the card is high or low.

Every time you get the right answer, the obtained points will increase double

If you fail in the double chance game, you will earn 0 points.

Your reward and rank will decided depending on the points that you have earned throughout the 5 rounds.

B.I.N.G.O! will be added to the Mini Game menu after your have cleared Story Chapter 21. EP 08. 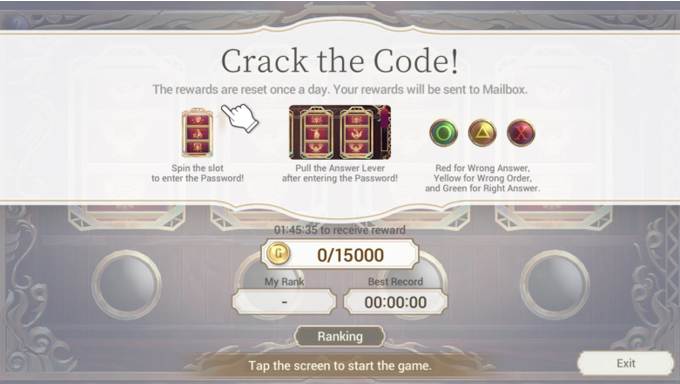 Enter the Password! is a game where you guess a 4-digit code consisting of the national symbol of Exos Heroes.

Each of the 4 slots is engraved with 10 national emblems.

You can change the patterns by moving the slots up and down.

After setting the 4 emblems, pull the lever on the right.

By examining the 4 patterns set, the lamp color will show how close you are to the correct answer. 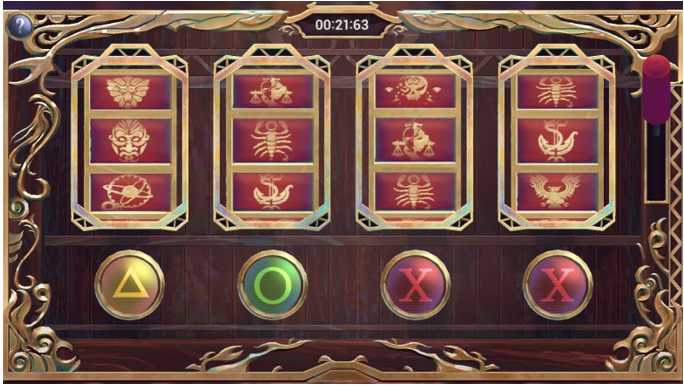 The ranks will be decided depending on how fast you get the right answer.

Enter the Password! will be added to the Mini game after clearing Story Chapter 21. EP 15.

A new ranking system in Mini Game, ‘Hall of Fame’ will be added.

The Hall of Fame will have the Top 1 ~ 3 users who have the best scores all of time.

The Hall of Fame ranks will not be initialized and will be renewed every time a new higher record is made. 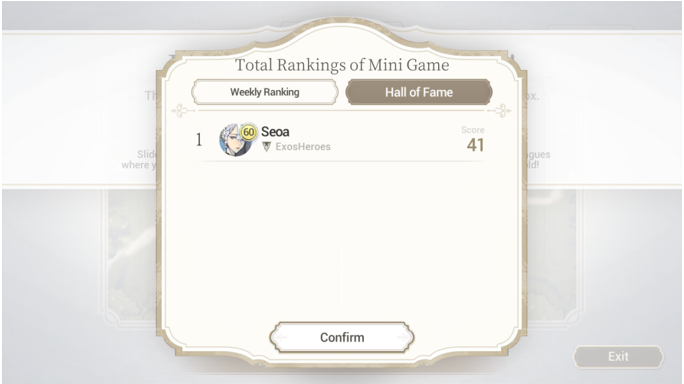 New titles related to the new mini games will be added.

The new titles and obtaining conditions are as below.

The story info box has been improved so that it is easier to use.

The Chapter scroll view will be added on the top of the screen for easier movement. 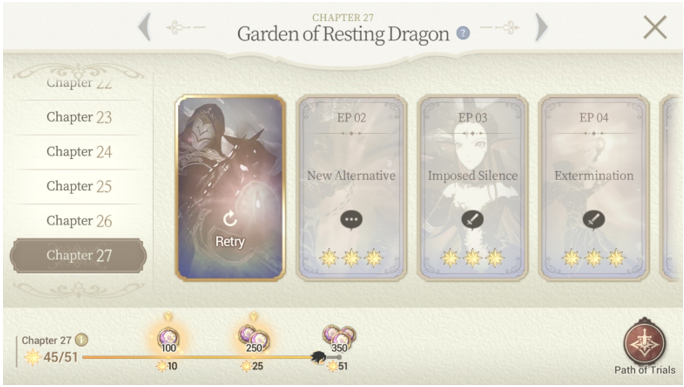 2 functions have been improved so that you can use the PC Client more conveniently.

There will be functions provided for setting the resolution and screen mode in the PC client.

The list of applicable resolution to your display device will be shown.

In the case of the Full screen mode, the optimal resolution will be applied so that the quality doesn't go down.

In the PC client you can control the size of the screen with your mouse and change to full screen with the Alt + Enter keys.

Through the ‘Print Screen’ key on your keyboard, you can screenshot the image in the same resolution and screen mode.

The screenshot image will be saved to the ‘Screenshots’ folder in Exos Heroes installation folder.

The third survey will begin to hear out your opinions!

In this survey, we have put in questions about the PC client and hero balance adjustment.

The survey can be participated through the banner popup on the right side of the screen in Airship / World / Village.

A small reward will be sent out to everyone who participated.

We thank everyone for all your valuable opinions,

And we will do our best to make the game with more fun contents based on your opinions.

For the 19th Eternal Bond, you can choose between 『Rachel』 and 『Bathory』.

A new season of Air Squadron Battle is beginning!

Air Squadrons that have at least 10 members and have completed applying to participate every week can take part in the Battle.

Every week, the Air Squadron buff effect will be applied to certain heroes. 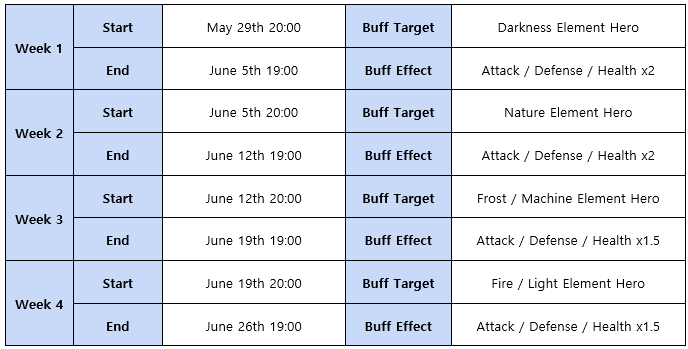 ※ There needs to be at least 10 Air Squadron members for the Master to apply to the Air Squadron for the Battle.

※ Only users who have participated in the Air Squadron Battle and Raid total of 14 times can receive the rewards.

※ There are no banned heroes in this Air Squadron Battle season.

You will need Hero Battle Pass to enter.

In the point of expiry, the Hero Battle mileages that you hold will be exchanged in 1:1 ratio for Solarseal and sent to your mailbox.

Hero Battle can be played after clearing story Chapter 02. EP 06.

We have added some new gimmicks to the June Yupir’s Labyrinth.

The Exos Pass of June is opening!

* For the Step 4 Reward, you will receive ‘[EVENT] Acrobat _ Luna (Orange)’ without the hero.

We have made amendments where the Attendance was not cleared in certain conditions even when you have accessed the game.

You were unable to participate in the Attendance mission if you have logged in before the update or temporary maintenance.

From now, we have made it so that you can participate in the attendance mission even if you access the game in such condition.

2 new Airship themes will be added.

Season 5 Hero Growth Guide schedule will be extended as stated below.

- Misty : Addressed the issue where Misty’s hair is shown abnormally in the PC client.

- Prithiof : Addressed the issue where Prithiof’s modelling is shown abnormally when he is set as the representing hero and enter the Village.

- Young Empress of Brunn _ Carrie : Addressed the issue where the voice and effects are not applied when equipping this Fatecore and attacking in basic mode.

- Young Prince _ Baraka : Addressed the issue where Baraka’s voice does not appear.

- Addressed the issue where the text font is shown abnormally in the Hero Recruit screen on the PC client.