In this director’s note, we would like to share with you the contents regarding the Season 6 update.

※ The name and details of the contents introduced in this Director’s Note are WIP.

Along with the new story, we are preparing various events and new content updates.

Here is a slight peak of the Season 6 update content.

In celebration of the Season 6 update, we are preparing various events and gifts.

Not only that, the Free Premium Recruit event, hero & equipment growth support and dye coupons for styling your heroes!

As mentiond in the last Director’s Note, there will be a Season 6 Auto Refund.

There will be 2 types of auto refunds made in Season 6.

For the Legacy Equipment Refund, all Legacy equipment that you have in your inventory will be disassembled and refunded with appropriate currency and materials.

After Season 5, there may be some confusion from the equipment that are no longer supported.

Therefore, we will prepare a more pleasant service by removing them all at once.

The Update Note Refund will be made for those users who have not accessed the game after the Season 5 update.

All system and currencies that are nonusable after the Season 5 will be refunded with an appropriate currency.

This process is to provide a better service to you all, so please kindly understand.

Along with the new season, the account level will also be enlarged.

The previous maximum level of 75 will be enlarged to 80 and the amount of Levistones you can hold with the level reach stage will be added.

In the Season 6 Memorial Saga, the colorful action play and stories will be continued.

We are planning to bring you the first Memorial Saga of Season 6 in the July update.

The main hero for this Memorial Saga will be a new character like Athlon.

Regarding the details on the Memorial Saga will be announced further in the next Director’s Note.

We are preparing the Hero Favorability content that received the most number of opinions for a new content through our last survey.

The new content is planned to be added in the July update for its perfection.

So please wait a little more for the new content where you can dive deep into the Exos Heroes worldview.

Due to the resurrection of Dragon Emperor Accor, a disaster comes to the Exos continent.

In the disaster that comes with Accor, each country on the continent seeks its own breakthrough.

In < Chapter. 28 A promise of Revenge > the story about Lenombe greeting Accor and a monster in human form will unfold.

In Chapter 28, the eternal blot of the empire, the story will be continued in the perspective of 『Vladimir』. 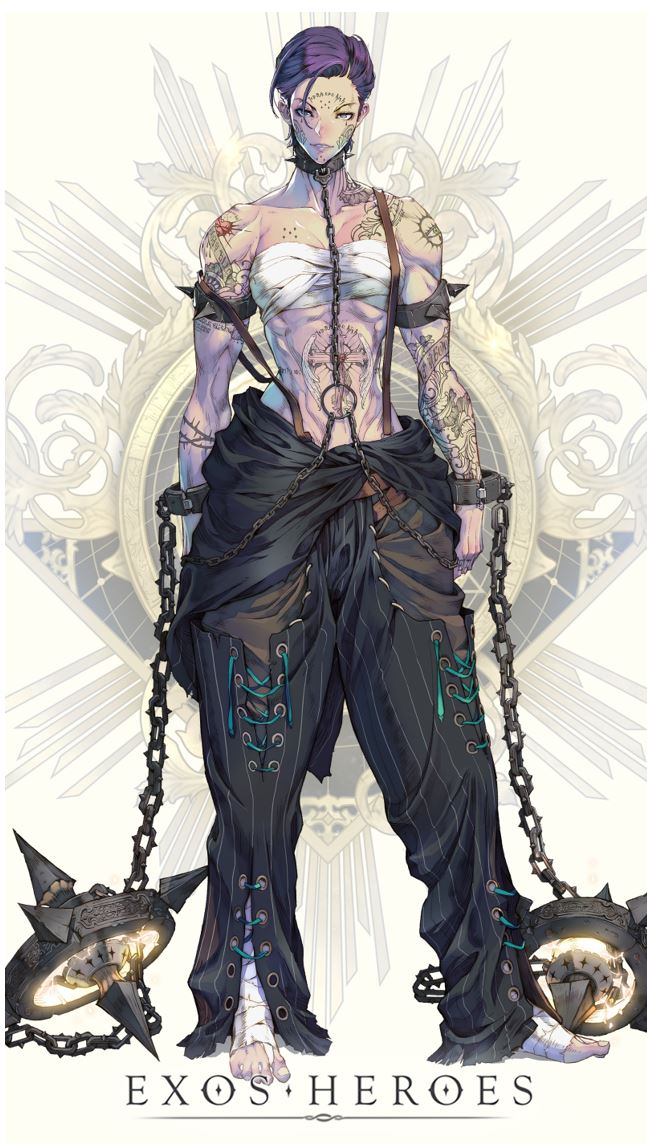 Vladimir is imprisoned deep within the Lenombe imperial dungeon, imprisoned by the decree of the previous emperor.

What wrong did she do?

Please look forward to Vladimir’s stories of the future and past.

In Chapter 28, a ‘Story Multi Route’ will be added where you can check out various endings to the story. 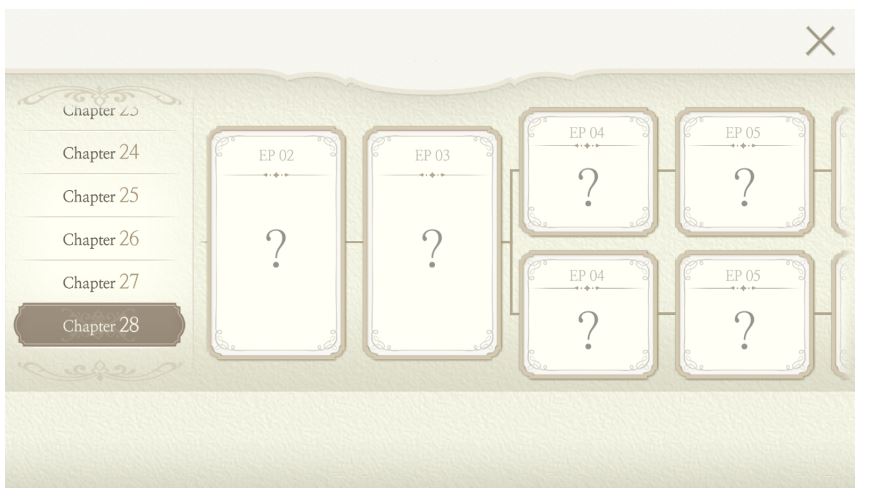 The next dungeon will be changed according to the dialogue determined in the options. 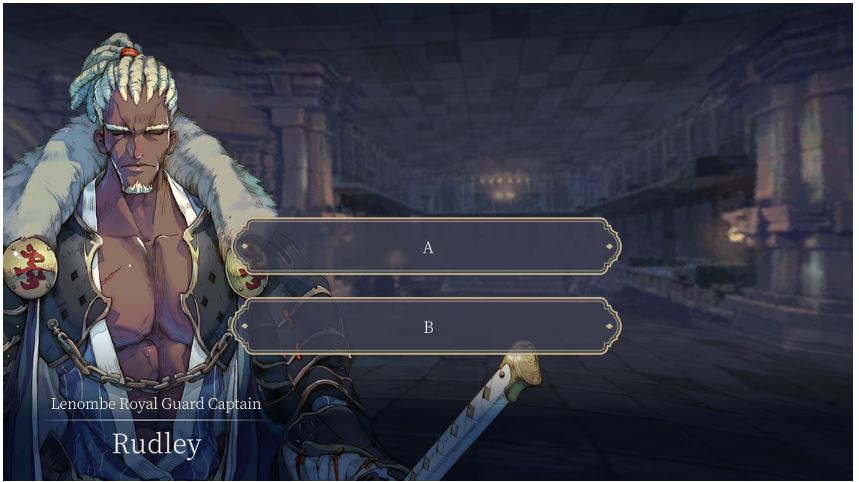 Please look forward to the Story Multi Route where you can enjoy the stories of Season 6 with more diversity.

Signature Force is one of the core growth contents where you can give abilities and buff effects to the heroes of the nations they belong to by using their signature fated hero.

Some time has passed after opening of all nations’ enhancement stage 4.

We have checked that many of you have already completed the Signature Force final stages.

We belive that Signature Force Enhancement enlargement will open more possiblities of the stagnant upper growth process and let you use the accumulated signature heroes.

Through the Signature Force, not only can you raise the stats but also various strategies will be possible using equipment and artifacts.

Along with the enlargement of the Signature Fore, Unleash Potential opening stages will be enlarged.

Unleash Potential is a growth content where you can raise the heroes’ abilities by using nation coins and ultimate orbs.

Not only growth of the heroes in each nation, we are thinking of making it possible to grow your own unique hero by adding the growth of unleash potential.

However, in the case of a Mythic hero instead of adding new stages, we are planning to strengthen the previous stage effects and let it become more powerful without having additional unleashment.

So please kindly wait a little longer for the chance for the heroes to become more powerful!

In Season 6, the Hero Growth Guide will begin again to welcome the newcomers.

The main hero for this Hero Growth Guide will be our favorite mailman ‘Yorm’.

Please show a lot of love and support so that Yorm in a cute sparrow costume can finish her job as a guide. 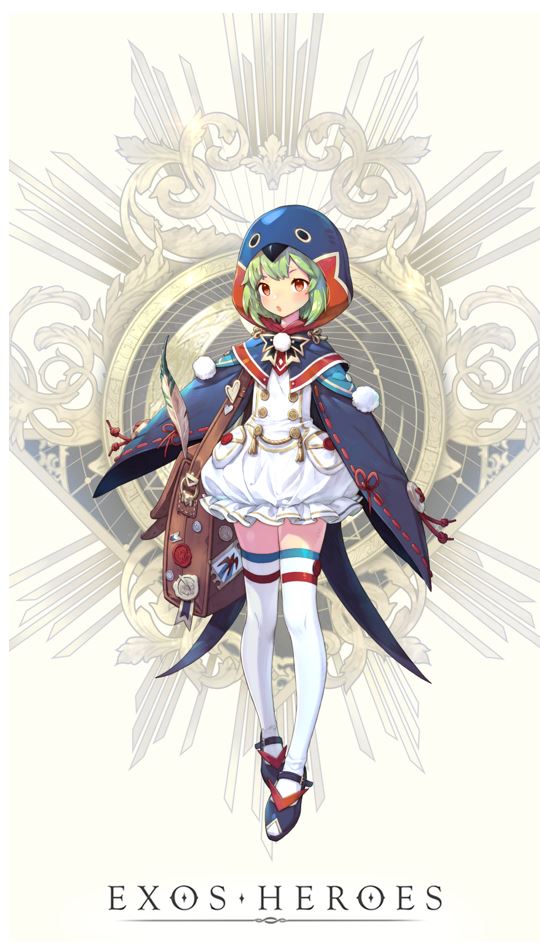 Along with the Hero Growth Guide, the mission UI will be improved and a new ‘Equipment Growth Guide’ will be added. 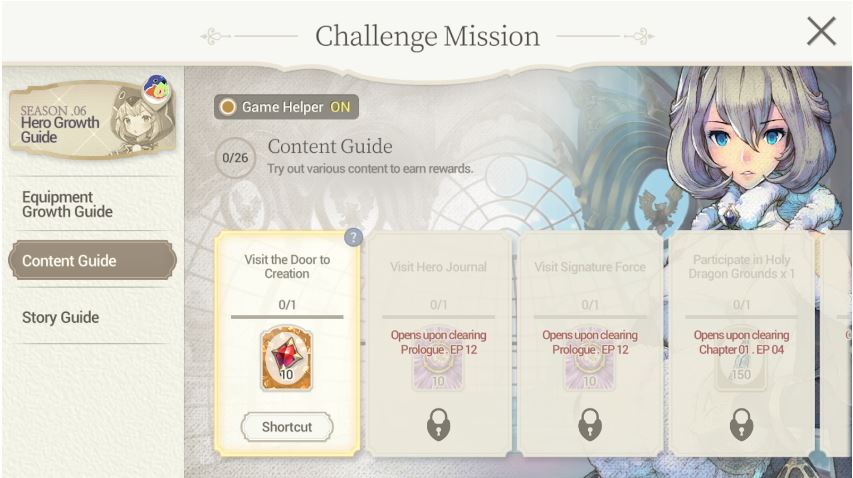 The Equipment Growth Guide is a guide to help the newcomers adapt to the Holy Dragon Grounds and the process of obtaining the equipment.

We will do our best in preparing so that you can join in the fun with the rest of us in short time.

We believe that it will be hard to fight against the Bone Dragon’s power with just the Equipment Growth Guide.

We are planning to lower the difficulty for the low dungeon stages in Holy Dragon Grounds.

Difficulty for 1 / 2 / 3 stages of each dungeon will be lowered so that we can support the newcomers in growing their accounts easier.

Infinity Core is a content where you can battle one more time against the bosses that were in Core Raid.

As much as it is a content that requires everyday play, we were supporting a subjugation function for your convenience.

It was convenient to clear the stages with the subjugation function however, there were still some inconvenience in forming the team manually yourself.

After setting the subjugation function, it will have the team be automatically formed. 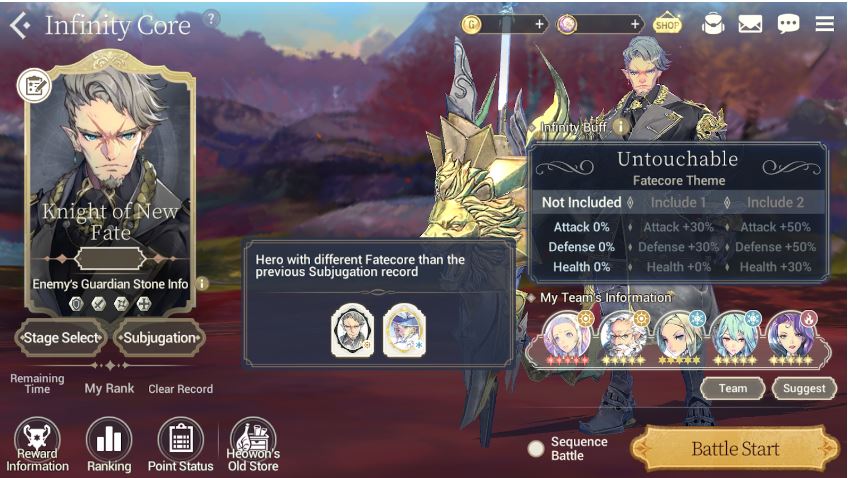 After having the team automatically set, there will be a notification to inform you of the previous record and changed Fatecore.

We will do our best to look into various ways for the fun of Infinity Core’s fun of strategy and convenience.

You can meet Dorka and Luna on our next Eternal Bond.

Along with the Season 6 update, the price for restoring the Eternal Bond will be lowered.

Previously, the restoring price increased in proportion to the date it was broken.

Now the price of storation will be fixed to 50 Xes regardless of the broken date.

In Season 5 update, the ‘Nation Premium Recruit’ was added to help you with growing your beginning account.

In the Season 6 update, 5 nations that were not added before will be newly included for recruitment. 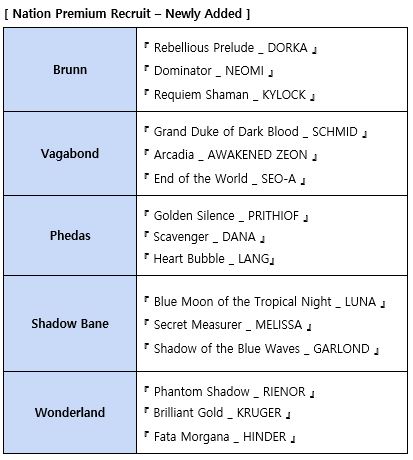 Another chance to purchase will be given for those who have already made the purchase as the nations are newly added.

Don’t miss out on the chance to strengthen your Airship with the updated list of nations to recruit from!

First of all, thank you everyone for showing so much love and support for our Exos Heroes PC client version.

All thanks to you, we are planning to enlarge another platform based on PC.

Steam client version is on its way!

Without going through the FLOOR client, you can enjoy Exos Heroes through Steam store.

Regarding the Steam client version, we will give you more details in our next Director’s Note.

Thank you so much for waiting for a long time.

We focused on the ‘Multi-world view’ and story delivery of Exos Heroes in Season 6.

For the stories we have put in the multi-route function so that you can experience different endings to the stories.

Moreover, we are preparing this season with Memorial Saga and a new content ‘Hero Favorability Event’ so that you can enjoy the game in various ways.

Furthermore, new heroes will be coming to Exos Heroes in Season 6.

The new heroes will belong to one of the 10 nations and we hope to give more fun to the game with the chemistry they will have with the previous heroes.

With the start of ‘Vladimir’ in the new story,

you will be able to meet the new hereos in the July update.

We are continuously thinking of ways that you can enjoy Exos Heroes in a better environment.

So, we have added Steam as another PC client platform.

To be frank, we cannot predict exactly what the outcome will be.

However, as an opportunity to introduce Exos Heroes to gamers all over the world,

we have prepared this so that you can all play the game more comfortably.

We will continue to work hard in the future!!

Thank you as always.