There will be an update maintenance on September 29th (Thu).

* The schedule may change due to unexpected issues.

You may not access the game during the update.

Update details may change due to unexpected issues. 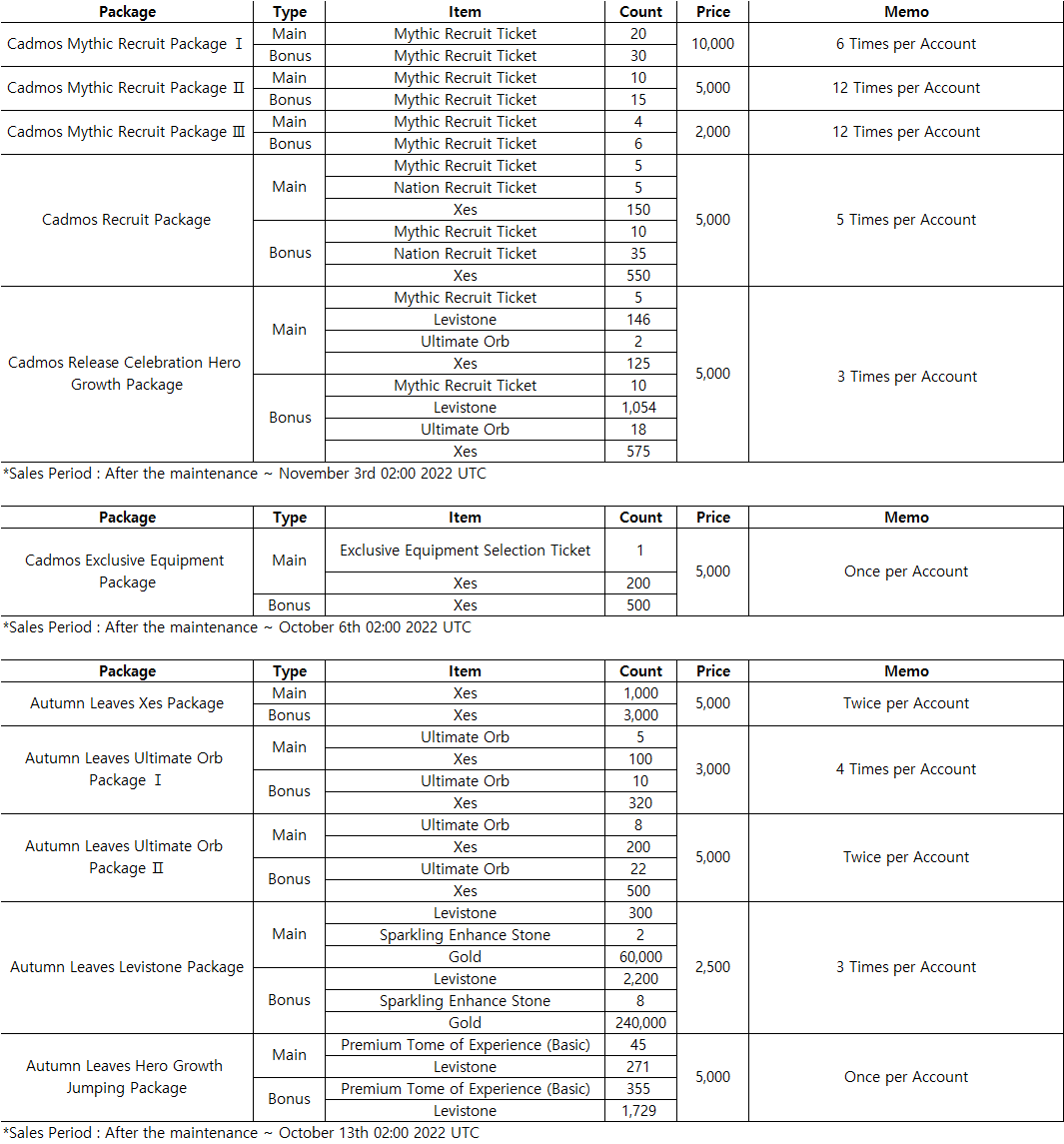 A seemingly spreading catastrophe has engulf Greenland and Estoris Republic.

Can the divided factions unite in the brink of disaster?

The story entering a new phase will be continued in < Chapter 31. Rusted Sillage >. 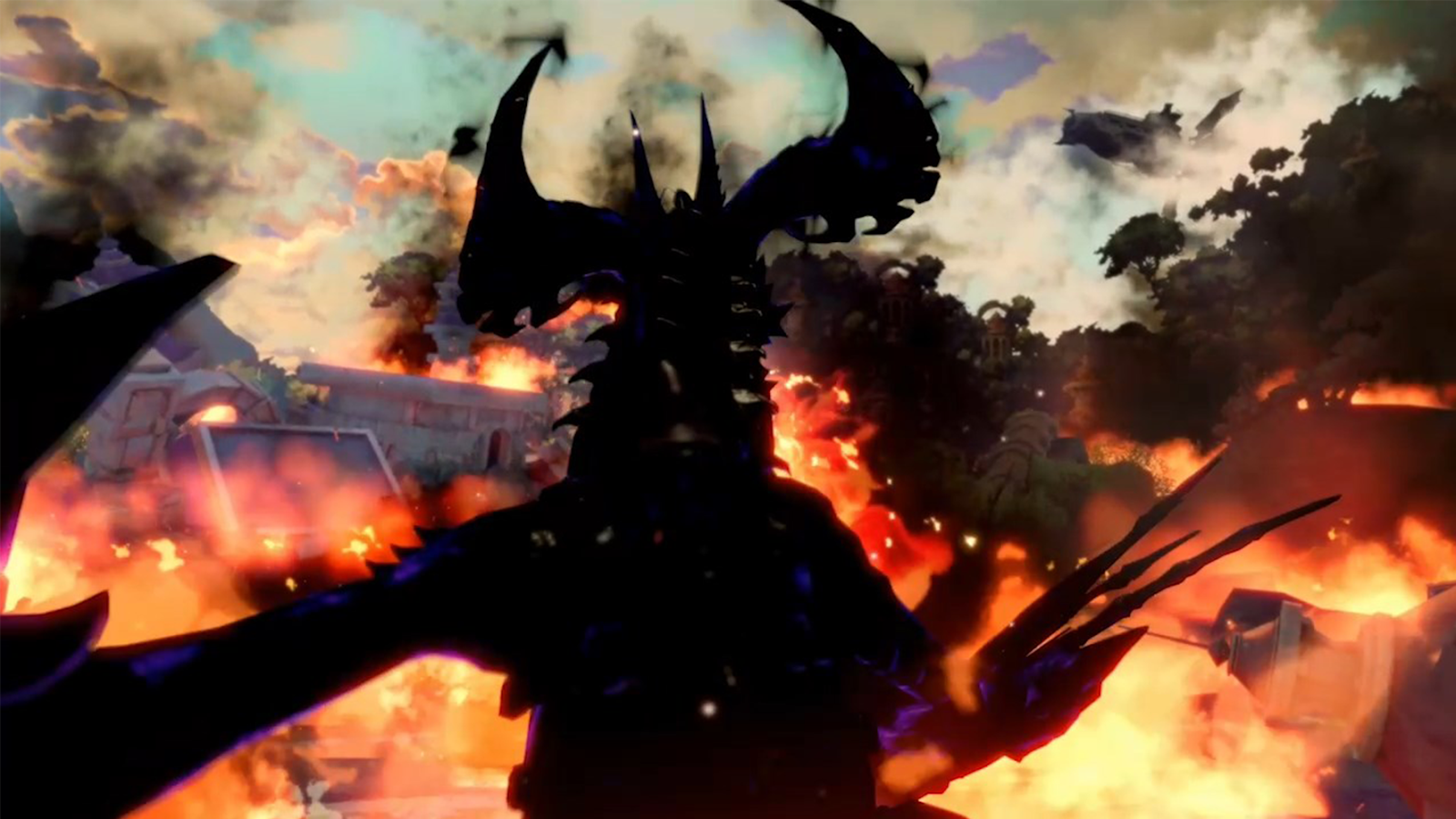 For an easier story progress, Story Chapter 30’s battle balance will be lowered.

Moreover, the passive effect of ‘Banshee’ who is a normal monster in Chapter 15 / 16 / 17 will be adjusted.

However, for your convenience, all the story node and daily quests will be based on Greenland.

‘Cadmos’ is the captain of the 8th Knights,

and is historically the best hero who defeated Dragon Emperor Accor and founded Lenombe.

Along with the appearance of ‘Cadmos’, Mythic Recruit will also begin.

“ The greatest hero and one of the founders of the Great Emperor's Nation of Lenombe.

The Legend of the 7 Heroes is well-known amongst the public today. And out of all the heroes, Cadmos’ name is always mentioned at the top as the one who made the most contribution. He was the first to pull out his sword against the tyrannic Dragon Emperor Accor. And the fact that his tales, which tells of his journey to gather all of the relics to seal the Dragon Emperor, are one of the most shared amongst the children is proof of his popularity. However, according to a secret history recorded in North von Frosty, Cadmos was supposedly a talented general, but could not be considered a noble hero. Misty’s personal diary has entries which claims that Cadmos is responsible for the death of the only Dragon Priestess Loel, and the truly noble hero Rood. Of course, those entries are not nearly enough to downsize the actual achievements made by Cadmos throughout history. He may have been an opportunist, but the modern continent of Exos is already over-shadowed by his presence.” 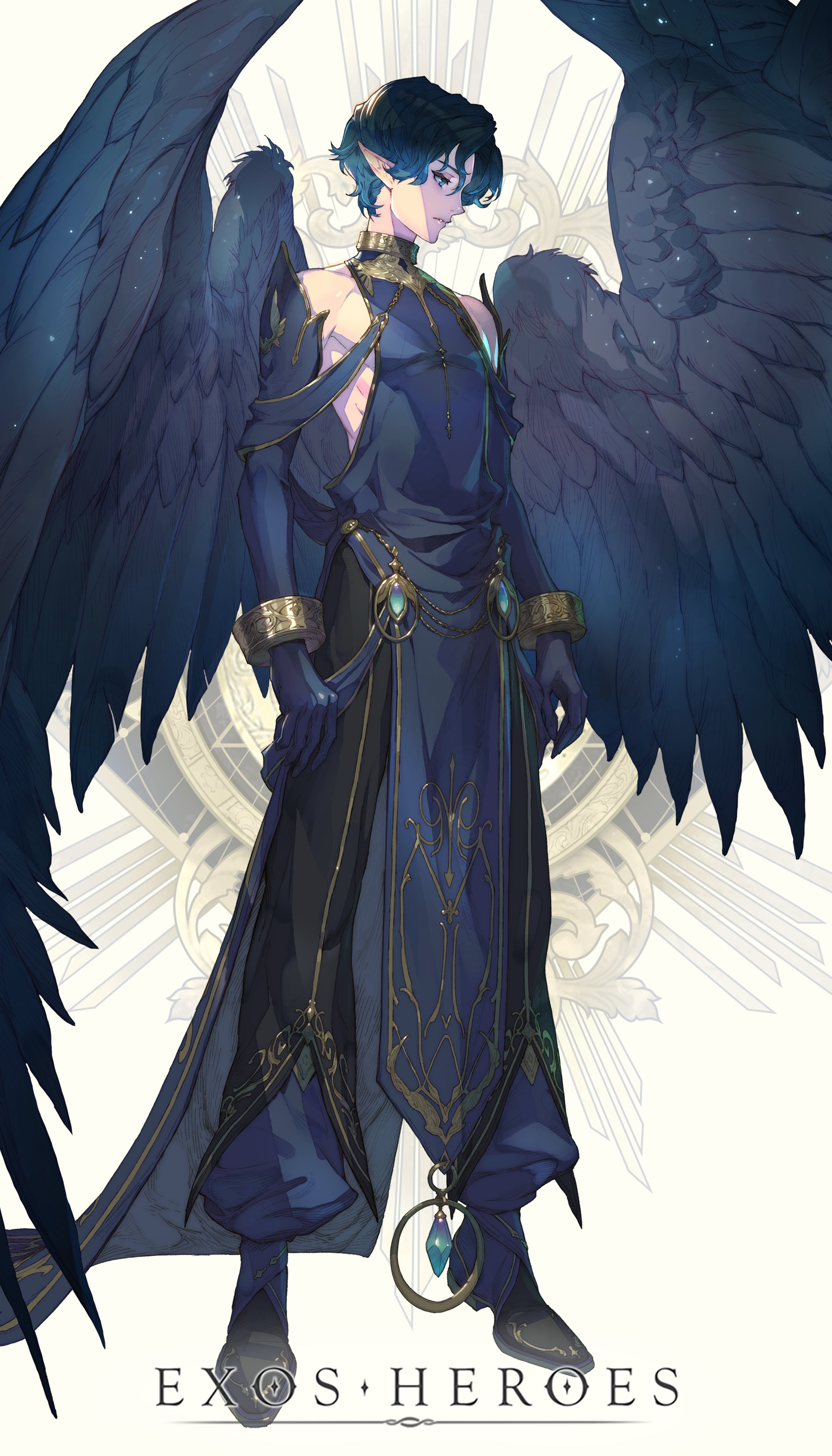 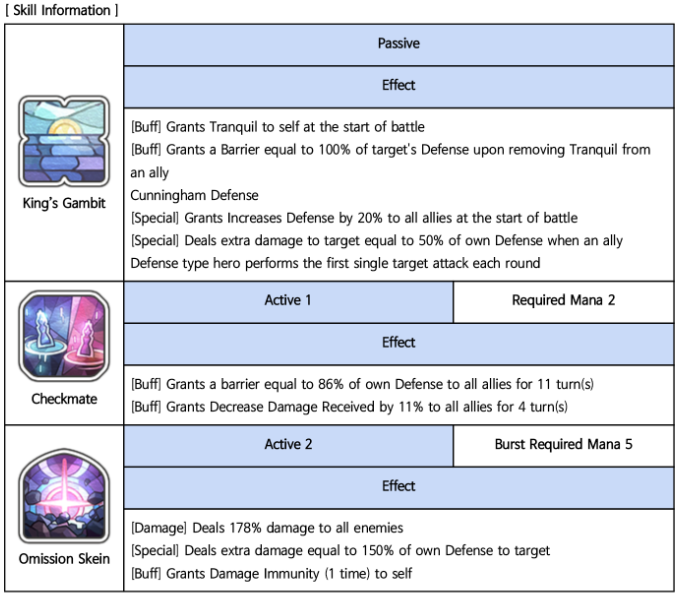 In the Mythic Recruit, you can obtain the step-up reward every 11 recruits.

There are up to 5 step-up rewards and you can get a ‘Black Fatecore Recruit Ticket’ from all stages.

※ You will need Mythic Recruit Tickets to recruit and will earn 1 Mythic mileage per ticket spent.

※ 280 Mythic mileages are required for a guaranteed obtain.

※ You can repeatedly obtain the Mythic mileage reward every 280 recruits and can get it up to 3 times.

※ The mileages and step- up stages are initialized once the chance up recruit s over and it cannot be recovered.

Streaks of countless stars have requested a night sky large enough to hide them all. The power stored within this sword does not wane no matter how many times it is swung.”

The Mythic Challenge Mission Event for you to obtain Mythic hero is here!

‘Rest Point’ function for those who cannot participate everyday will be added. 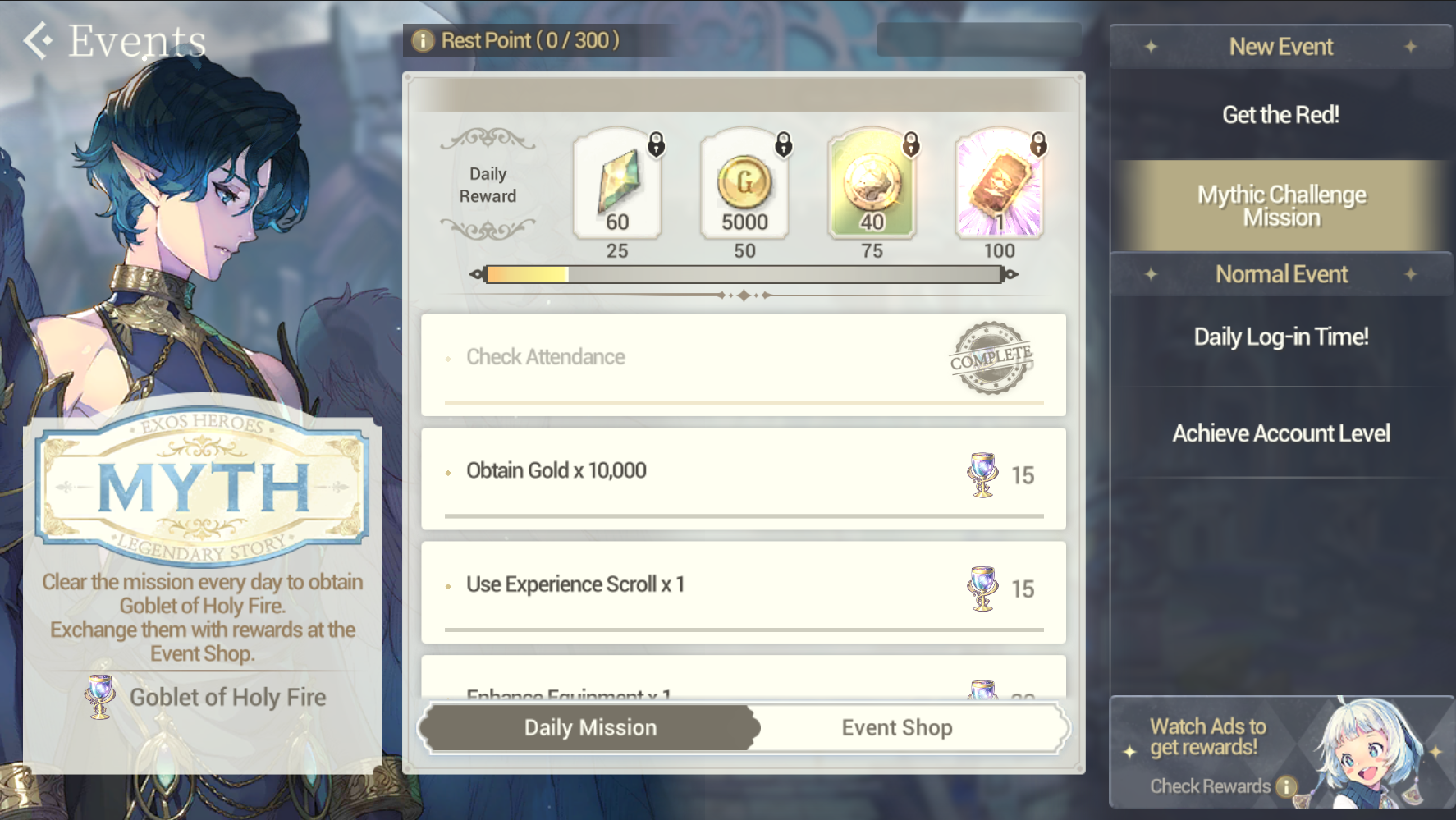 If you clear the daily mission, you can get ‘Glass of Sanctification’.

he daily mission clear record is reset every day, so you can try again and acquire Glass of Sanctification.

The Daily Reward is a reward that can be obtained according to the number of Glass of Sanctification obtained every day.

The Daily reward acquisition record is reset every day and can be acquired again.

In the event shop, you can purchase items using the obtained Glass of Sanctification.

In this event shop, you can acquire various items such as Mythic Recruitment Tickets, Gold Fatecore Memory, Ultimate, Holy Water of the Universe and many more.

If you have not accessed the game during the Mythic Challenge Mission event period, then you will gain 10 Rest Point per inaccessed day.

If you clear all the daily missions from the challenge, the Rest Points will be automatically consumed for additional Glass of Sanctification.

※ The price and number of available purchases are different for each product in the event store, so please check before purchasing.

The 5th Memorial Saga story, < Eluen > will be updated. 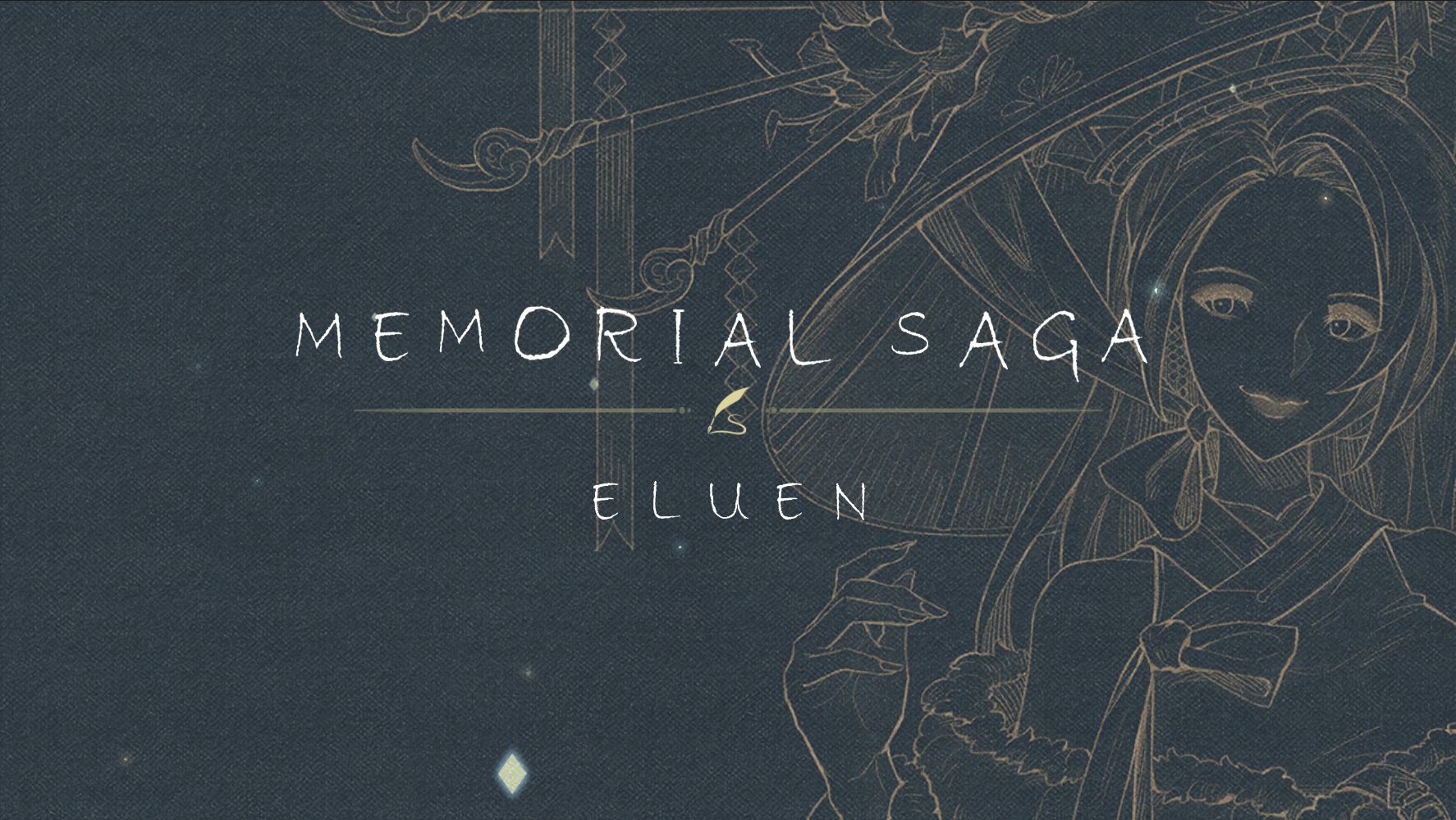 Memorial Saga - < Eluen > is about Eluen who became a mercenary to become the strongest, in the background of around 20 years ago.

What adventure will await Eluen? 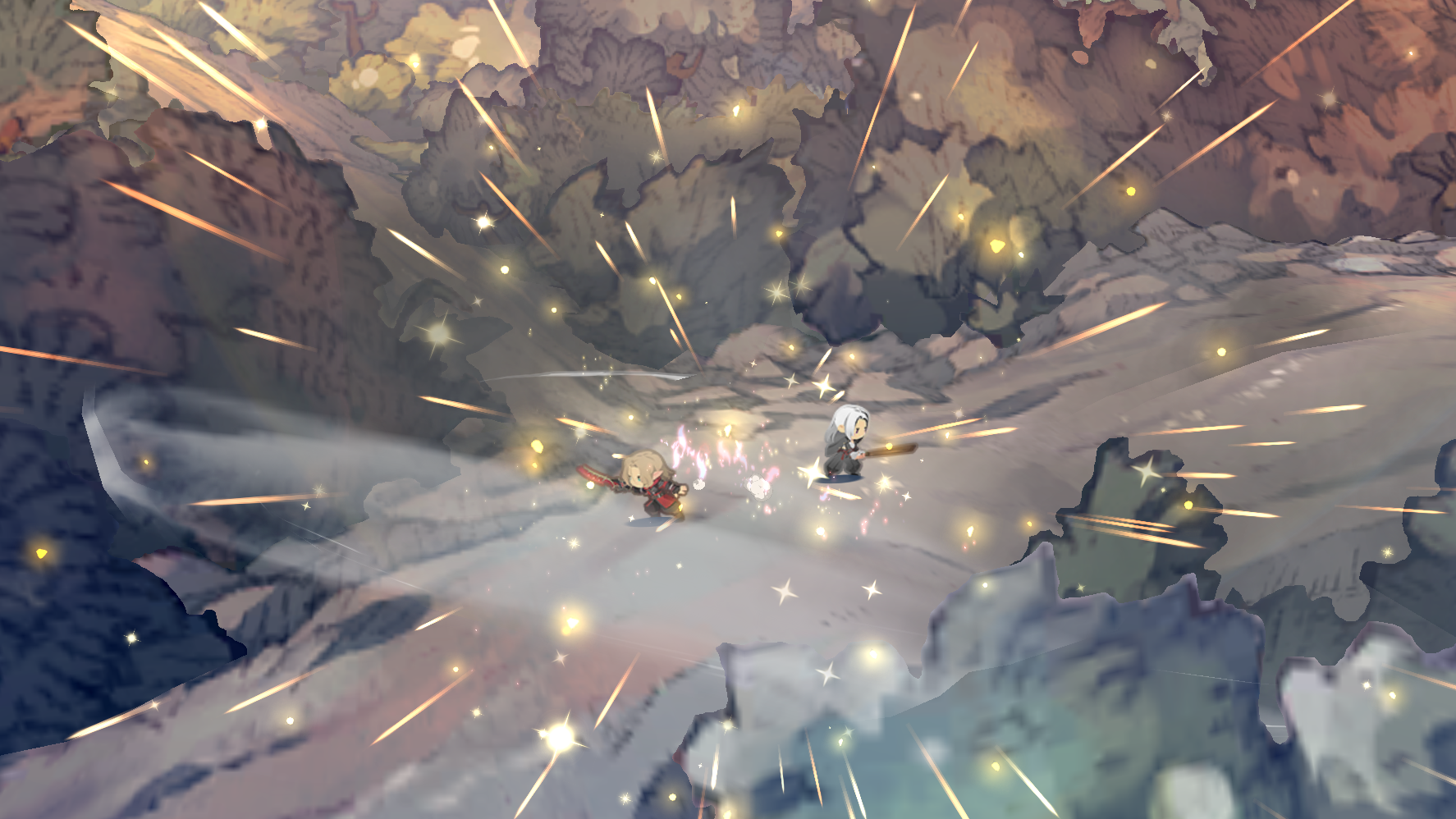 ※ Memorial Pass can be purchased with Crystals.

※ In this Memorial Saga, there will be no ‘Memorial Package’.

The 3rd Season of Arkvurze will begin!

This Arkvurze will have the ‘Normal Battle’ and the ‘Balance Battle’ will not be open.

The matching condition depending on the Arkvurze tier will not be applied and the match will be divided into 2 groups.

Moreover, for a more stable and fast matching, the entering time will be as below.

Arkvurze Friendly Game is a new battle mode where you can enjoy the content with no pressure. 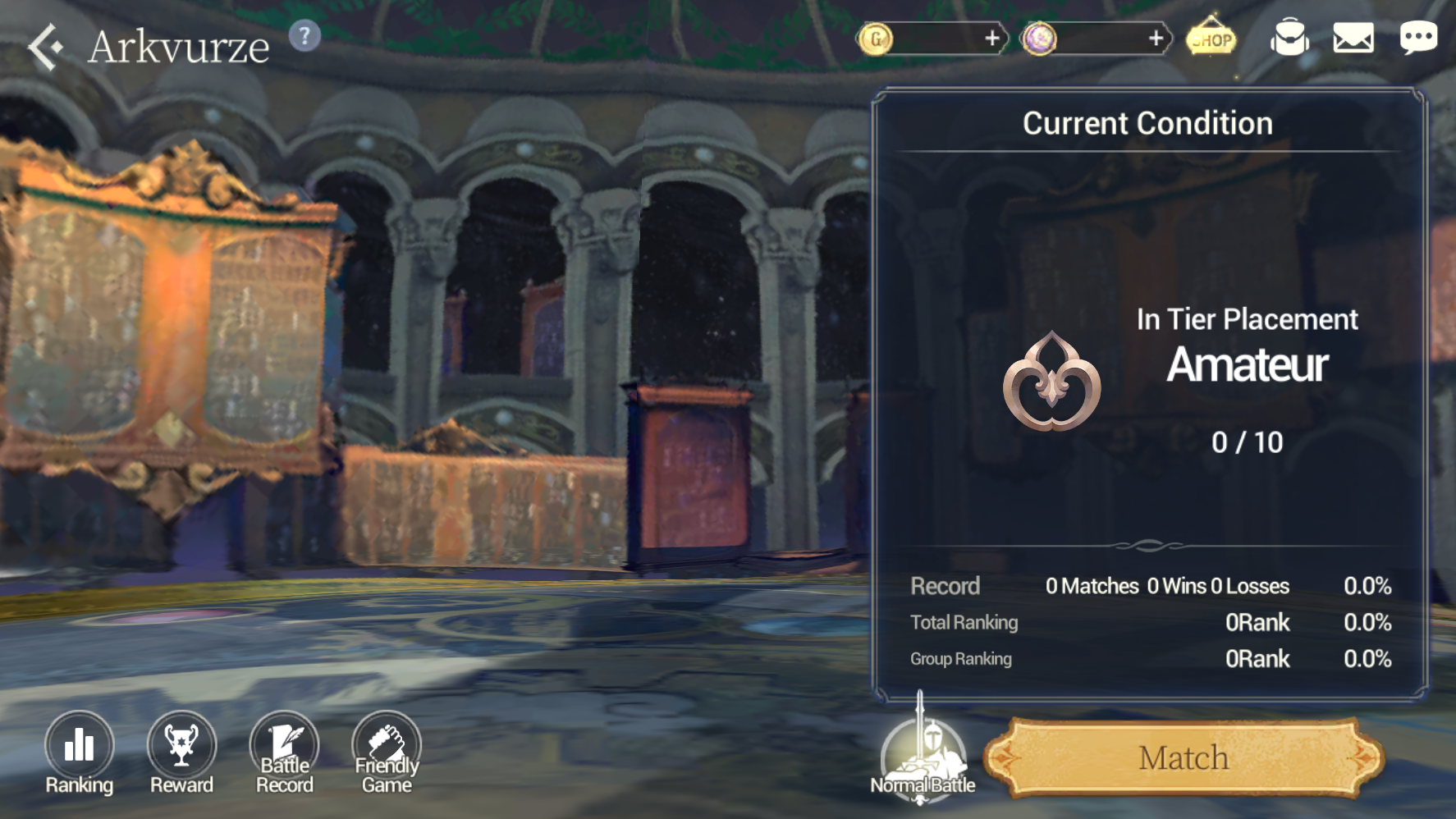 On the bottom left side of the Arkvurze screen, you cant enter through the ‘Friendly Game’ button.

You can play with your alliances who are currently in Arkvurze, Air Squadron members, and other users.

You can request a friendly game to the users appearing in the list and the battle will start once they accept. 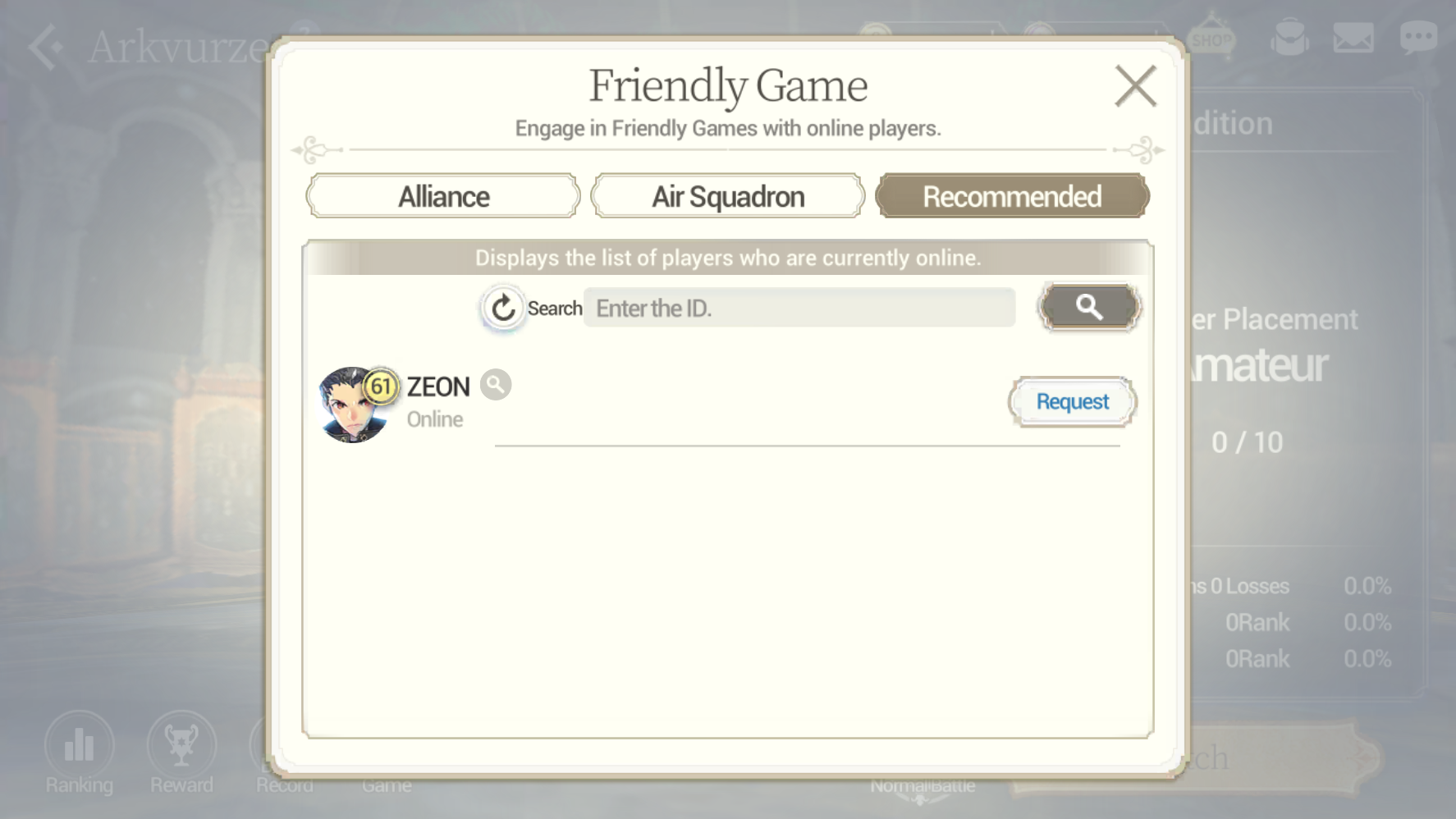 The friendly game results will not be recorded nor will be applied to the Arena point and rankings.

If you do not wish to be invited to the Friendly games, go to ‘Settings > Game Settings > Arkvurze Friendly Game Invitation’ category to decline the invites.

A limited period event for you to obtain 'Season 6 Memorial Crystal’! 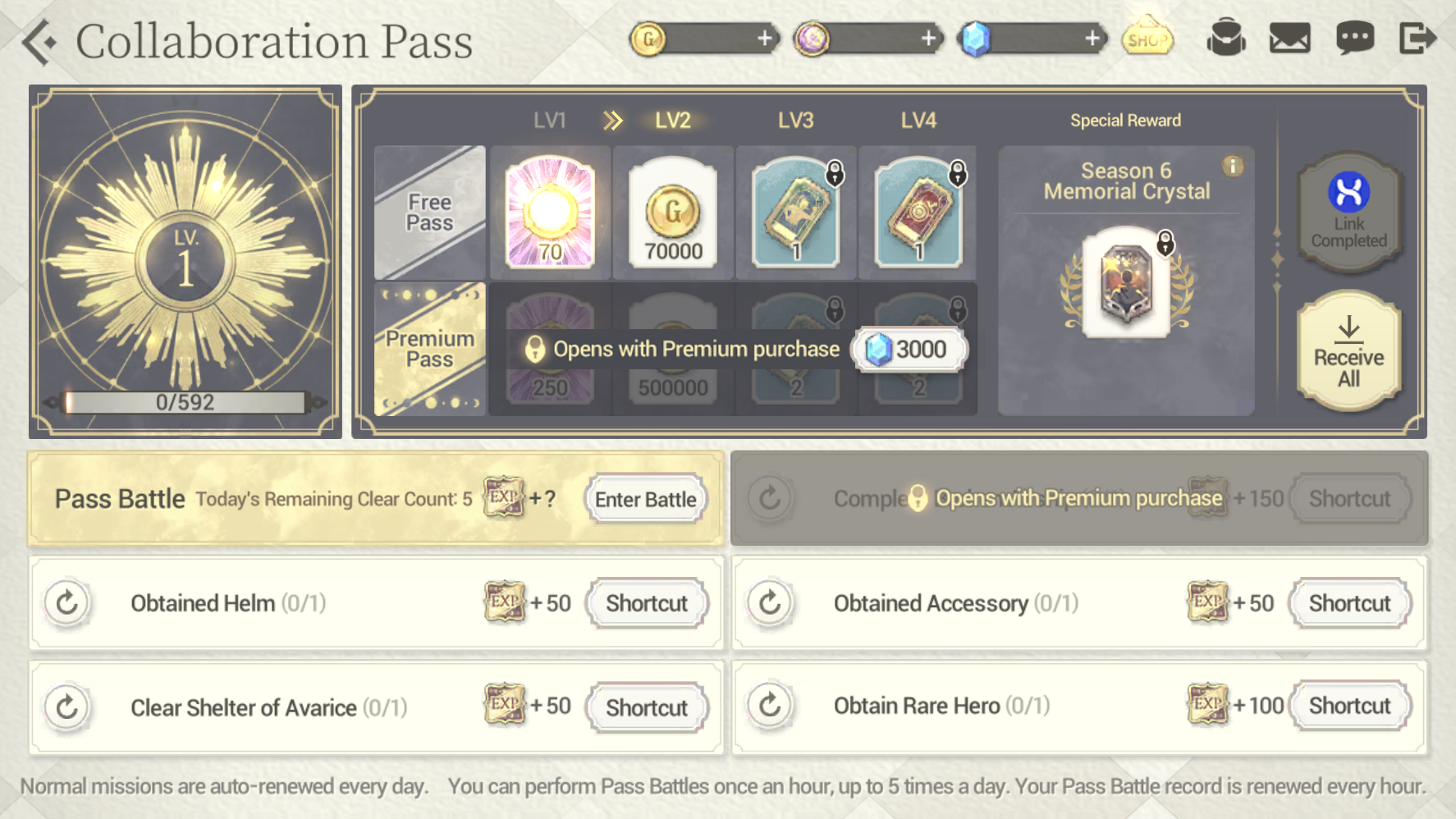 : You can obtain various rewards with the Pass experience points by clearing the Pass battle missions from Collaboration Pass.

: Level up your Pass Level by stacking Pass Experience points and you can obtain the rewards for each level.

: The Collaboration Pass will be open after clearing Story Prologue. EP 10.

'Memorial Crystal' is an NFT to commemorate our memories together.

Once you reach the MAX level of Collaboration Pass, you can apply for the NFT.

You will need to ‘Connect with Luxon Account’ to request NFT.

For those who have been selected,

we will airdrop the Season 6 Memorial Crystal to you in groups each week.

When you are selected to receive the airdrop, it will be provided through the Luxon account that you have connected with.

Unfortunately, the amount of Season 6 Memorial Crystals that we can send out is limited,

therefore, it will be sent out to the first comers.

Prithiof of the parallel world draws a sword for the revival of his family. 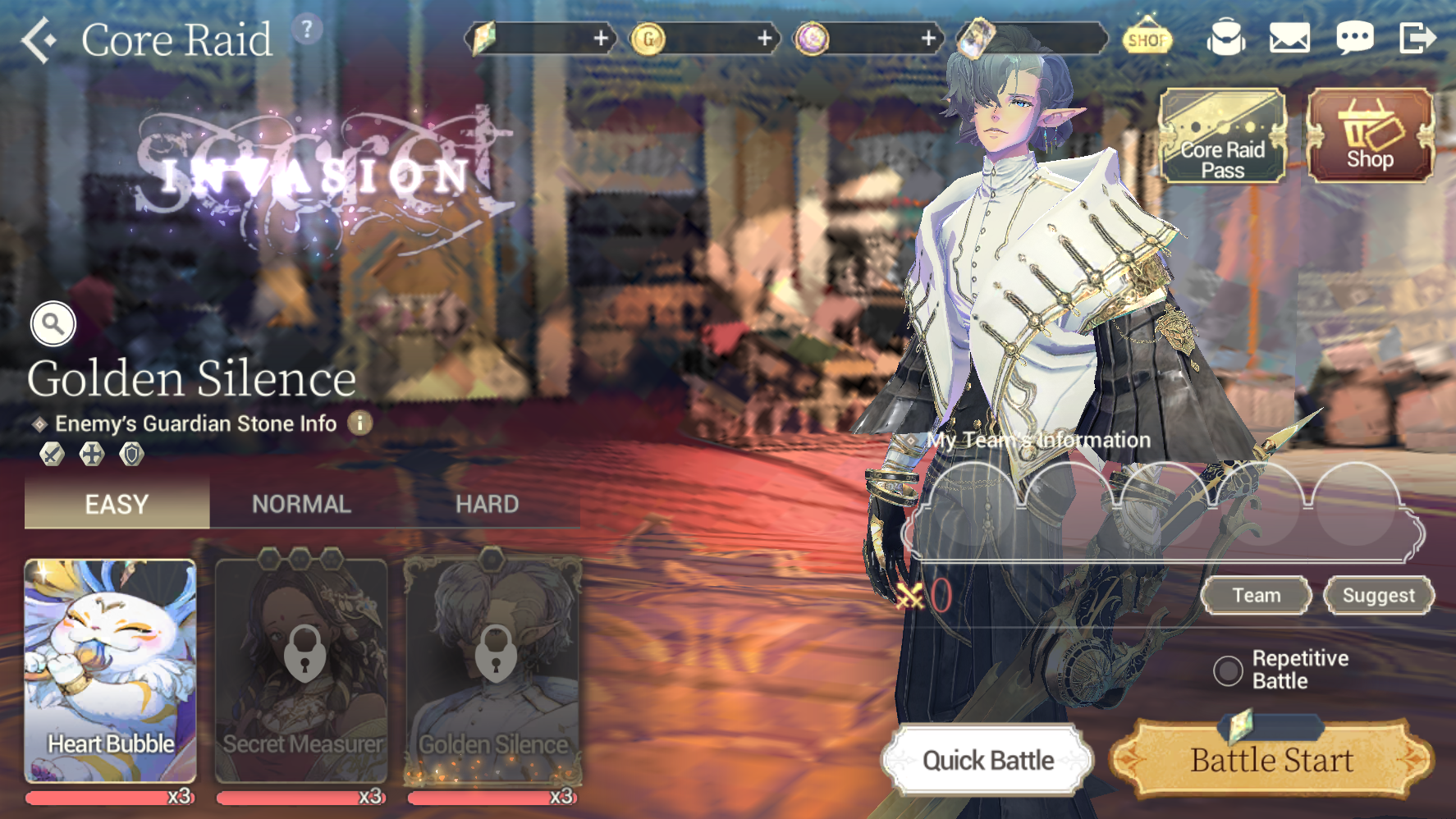 You can purchase items from the shop with the Raid Coupons that you have earned from Core Raid.

If you purchase all the Raid items, you can obtain a step-up reward.

Through the step-up reset, you can get the next stage of Raid items. 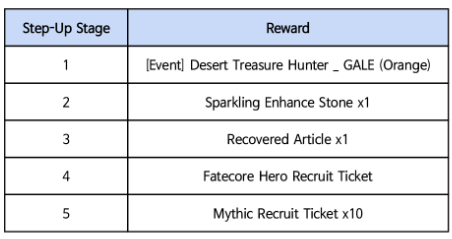 You can obtain ‘[Event] Desert Treasure Hunter _ GALE (Orange)’ without the hero.

※ Raid items can be updated to the next step of Raid items by resetting Step-up.

※ Step-up reset will not be available once you have obtained all the step-up rewards.

A Hero Battle where you can acquire new stories and April is open.

You will need Hero Battle Pass to enter.

In the point of expiry, the Hero Battle mileages that you hold will be exchanged in 1:1 ratio for Solarseal and sent to your mailbox.

Hero Battle can be played after clearing story Chapter 02. EP 06.

The October’s Yupir’s Labyrinth is here with new gimmicks.

The Exos Pass of October is opening!

: You can play up to 5 times a day, and the obtainable Experience Point vary depending on the difficulty.

: The entering condition may differ depending on the dungeon difficulty.

: Bonus missions will be provided for additional experience point with a certain probability. 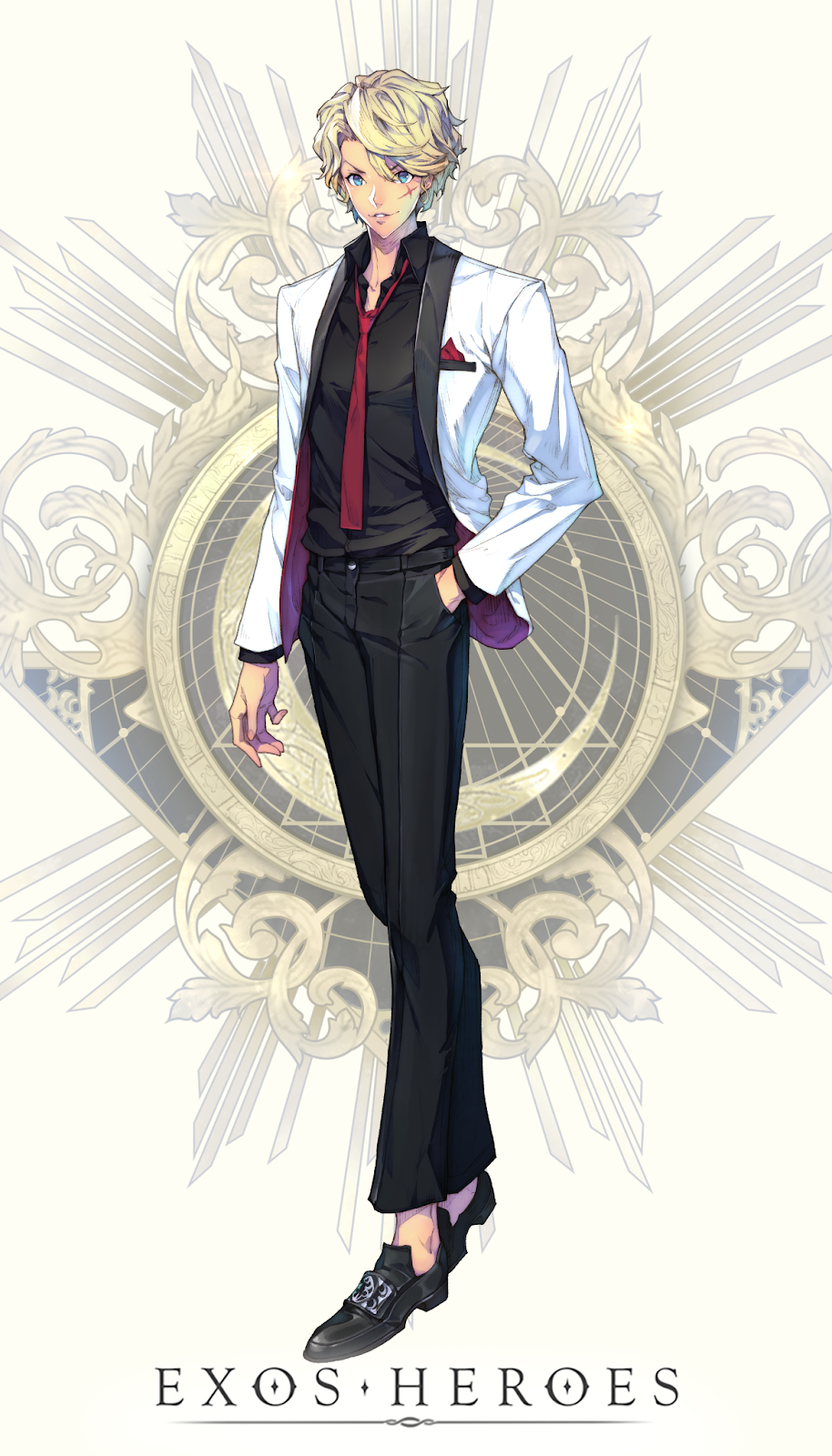 * For the Step 4 Reward, you will receive ‘[Event] Midnight Da Capo _ Rachel (Orange)’ without the hero.

The default setting for the equipment sorting order has been improved.

When you enhance the equipment and artifact, we have made improvements so that the not yet enhanced target can be easily used as a material.

We have made improvements so that you can easily select the non-enhanced equipment and artifacts that you would like to disassemble.

Now, you can select the equipment and artifacts that have not been enhanced as default when using the Select All function.

However, you can set it so that the enhanced equipment can be selected through the ‘Include Enhanced Equipment’ category in the Select All popup. 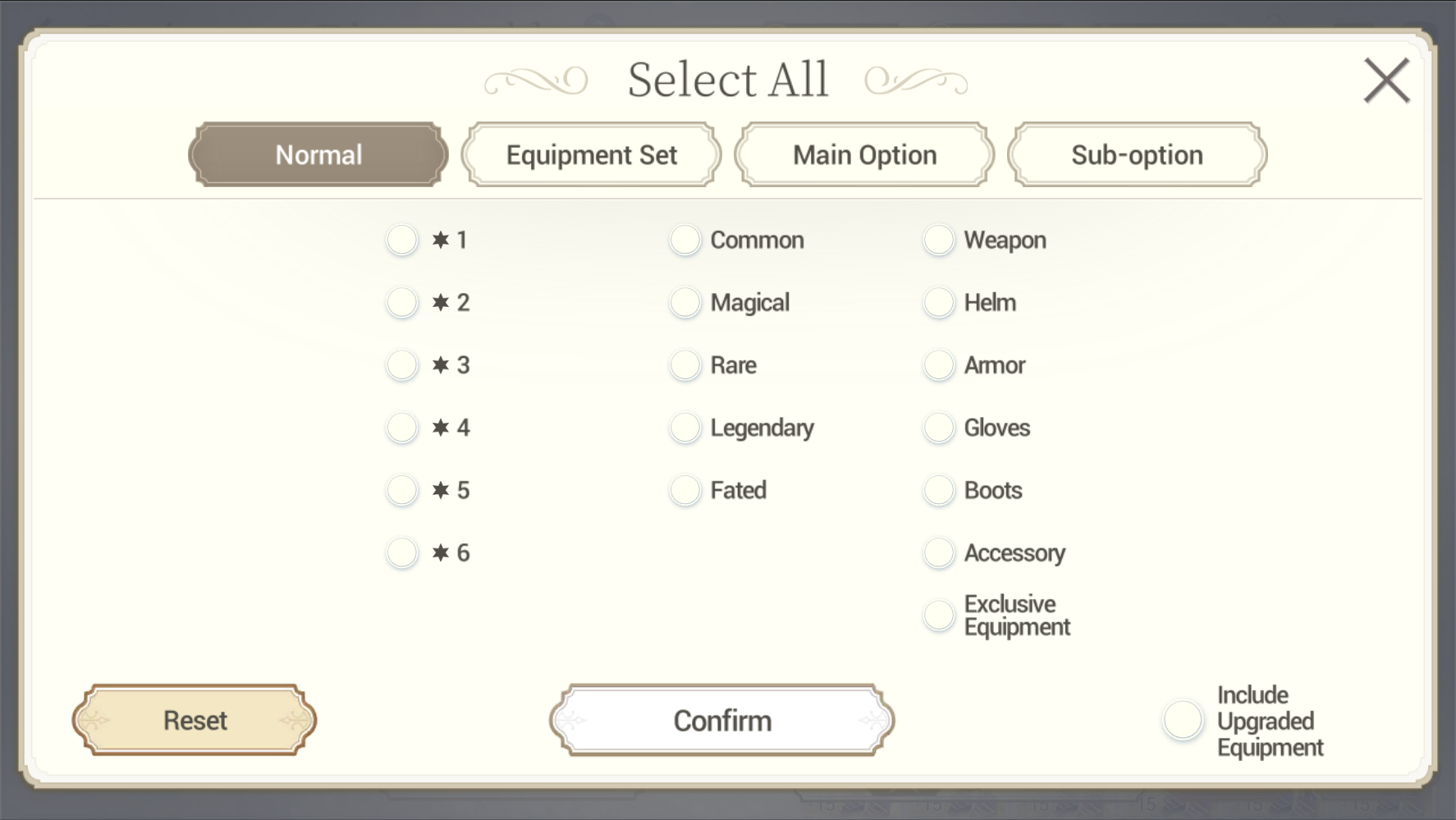 Choice Fatecore Re’ is an event where you can select the Fatecore of your choice to recruit with higher chances.

Now, when you select the Blue Fatecore from the list of recruit heroes, the buff information of the heroes will appear for you to check before making your decision.

Moreover, a tool-tip function where you can check the details of the buff effect will be added so that it will help you when selecting the hero to recruit. 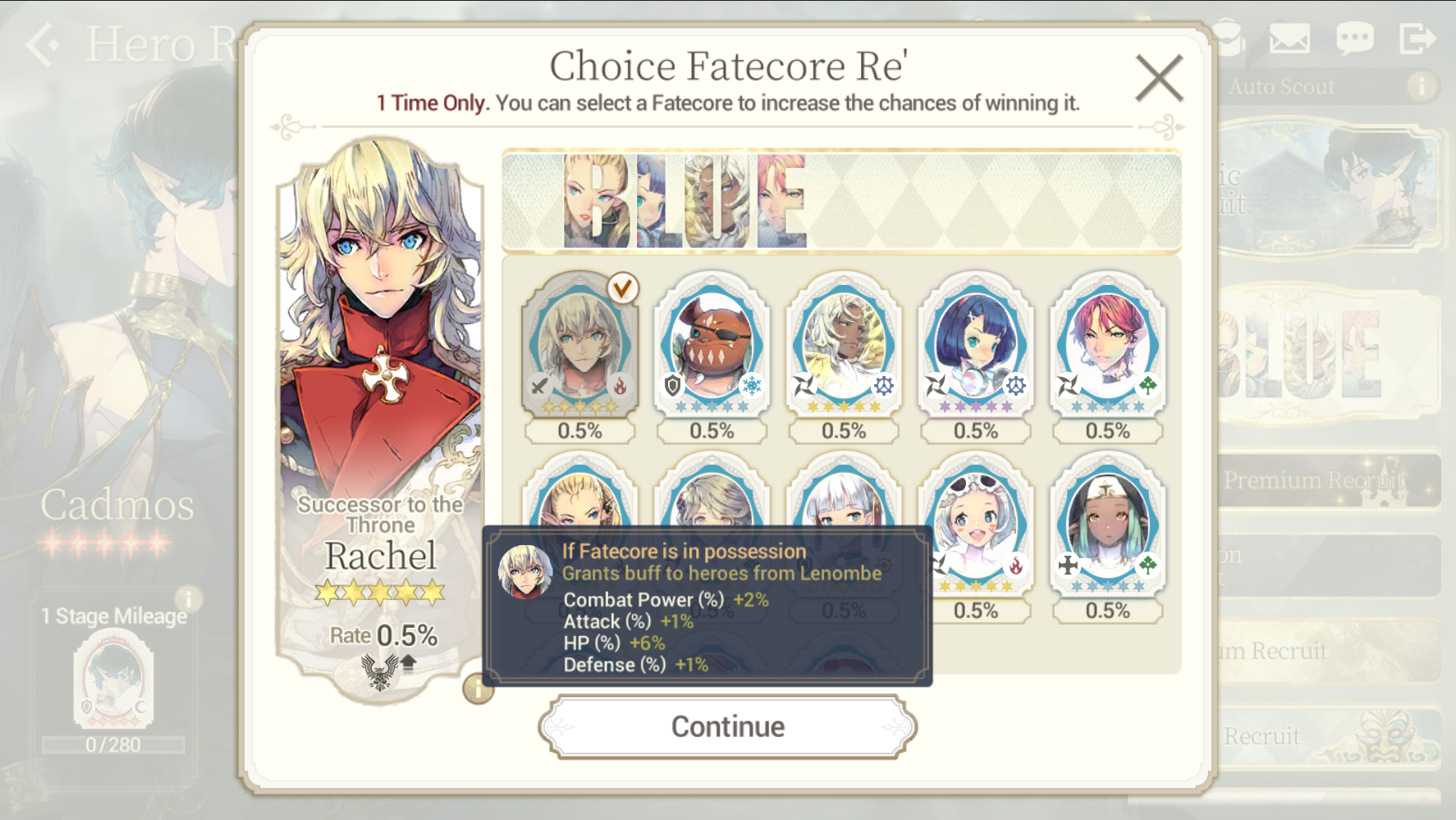 In order to express the Passive skill activation condition of Silver Fatecore more clearly, we have changed the way the skill texts are shown.

The Passive skill activation condition and effects themselves will not be changed.

ㆍ Before : Show the Passive skill activation depending on the World area.

ㆍ After : show the Passive skill activation depending on the Story Chapter.

When using the controls on FLOOR and Steam clients, the mouse cursor will not be automatically placed in the middle of the screen.

- [Unique] [CODE : ERATO] _ RIENOR : Addressed the issue where the appearance of the exclusive equipment was not being applied when equipping the Fatecore.

- Addressed the issue so that when entering Holy Dragon Grounds, the default dungeon is set to ‘Fire Bone Dragon’

- Addressed the issue when using the ‘Exchange Equipment’ function to unequip the equipment, the hero’s ability information appears abnormally of the one that used to equip that equipment.

- Addressed the issue where the timeline on the bottom of the screen is shown abnormally when turn initiation is applied to several heroes at the same time.

- Addressed the issue where Zebenstunier was inaccessible after playing the Mini Game ‘BINGO’.